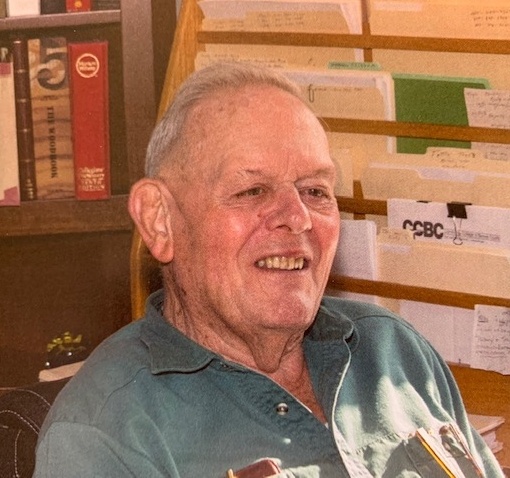 William H. “Ol’ Bill” Gillespie, 90, of Charleston, a forester, naturalist, and fossil expert, passed away on Tuesday, January 26, 2021, at his home surrounded by his loving family.  He was born January 8, 1931, in Webster Springs, West Virginia, to William Marston “Mart” and Rosalie Geneva “Bill” Frazee Gillespie.  He was educated in the Webster County schools, graduated from Webster Springs High School in 1948, and attended the WVU School of Forestry where he received his bachelor’s degree.  He then obtained a combined master’s degree in plant taxonomy and geology and ultimately became an adjunct professor at WVU in the Department of Geology and Geography, supervising many master’s and Ph.D. candidates.

In 1967, Bill began his 37 year career in state government, including 18 years as deputy commissioner of the West Virginia Department of Agriculture and 8 years as the director of the West Virginia Division of Forestry and State Forester. In 1980, on one of his many field trips to search for fossil plants, he came upon a rock near Elkins, West Virginia, which held a fossil seed estimated to be 360 million years old.  That discovery made it the oldest plant seed ever found in the world and created an international sensation in academic circles.

Among his many distinctions, those of which he was most proud included being the father of five children, a certified forester, a member of the West Virginia Lumberjack Hall of Fame, and a member of the Southeastern Woodchopping Championship Hall of Fame.

Bill was predeceased by his parents, his beloved wife, Betty Jean Rasnick Gillespie, to whom he was married 64 years, a son, James David Gillespie, a daughter, Linda Gillespie Harless, and a brother, Dr. George F. Gillespie.  He is survived by his three children, William A. Gillespie, MD, of Hilton Head Island, SC, Clifton P. Gillespie of Dillsburg, PA, and Laura Gillespie Elson, of Raleigh, NC.  He is also survived by his son-in-law, Jerry Wayne Harless, of Elkview, WV, a sister, Patricia Hamrick Gillespie, of Nutter Fort, WV, 8 grandchildren, 17 great grandchildren, and numerous nieces, nephews, extended family, friends, and business associates.

Due to Covid 19 concerns, a graveside memorial service at Miller Cemetery in Webster Springs, WV, will be private. There will be no calling hours.  A celebration to honor Bill’s life will be planned for a future date.

In lieu of flowers, donations are welcomed at St. Jude Children’s Research Hospital.

Dodd & Reed Funeral Home is honored to be serving the Gillespie family.

To order memorial trees or send flowers to the family in memory of William Gillespie, please visit our flower store.