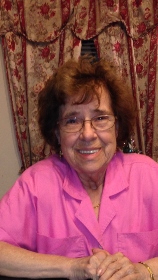 Vaunda Lee "Pat" Skidmore, 82 of Webster Springs was called home by our Lord on Monday, January 05, 2015. Born to Gay and Betty Fike Moffatt on August 05, 1932 in Cowen, she was a lifelong resident of Webster County. At the young age of 24, in 1957, she began her career as what would become "the heart of the hardware department" at Cutlip's Store where she worked until it's closing on July 9, 1990. Her 40 plus years at Cutlip's made her a pillar in the community, known and respected by many. The next chapter of her career began when she worked with Mike Hall and Brandon Moll at the Webster County Extension Office until she accepted the position of Regional Manager for the West Virginia Work Force Career Center branch office in Webster Springs. It was in this position where she again helped countless friends and neighbors of the community with their employment needs.  "Strongest lady I ever knew", "Friendliest smile", welcoming, compassionate, loving; these are just a few of the accolades used by many when describing little Pat.

Friends may join the family for visitation on Saturday, January 10, 2015 from 6:00 to 9:00 PM at Dodd & Reed Funeral Home. Funeral Services to celebrate Pat's life will be held on Sunday at 2:00 PM with Rev. Brandon Moll officiating. Interment will follow in Union Cemetery, Parcoal. In lieu of flowers, Memorial Contributions may be made to your local chapter of the American Cancer Society.

To order memorial trees or send flowers to the family in memory of Vaunda Skidmore, please visit our flower store.