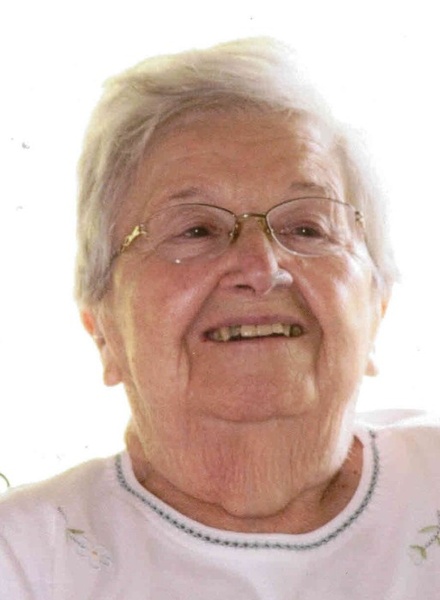 Thelma Gay Simmons Anderson passed away August 17, 2016 in Morgantown, WV at the home of her daughter and son-in-law Tewana and Gary Burch.  She was born April 9, 1922 in Webster County and was the daughter of the late Steve and Ida Carpenter Simmons.   Along with her parents she is also preceded in death by her husband, Elbert L. Anderson, daughter, Vickie Beth Anderson; daughter in law Kristin Anderson; brothers, Arlie, Roy, and Dempsey Simmons; mother and father in law, Mary Beer Anderson and Ford Anderson, whom she took care of, he affectionately called her “Thelly”.

Thelma loved going to church and reading the Bible.  She was a very active person. She always wanted to help others instead of them helping her.  She donated time to helping the Hacker Valley Community Ramp Dinners by baking her famous “Hot Rolls”.  She spent 14 years as a custodian for Hacker Valley grade School and also enjoyed babysitting.  Her greatest joy in life was having her family around, most importantly the grandchildren.  She always enjoyed cooking and baking for the family at holidays and reunions.  She also enjoyed baking her famous “Hot Rolls” for her brother-in-law Ernest Fisher.  She loved with her husband Elbert to family and friend’s homes to play music sing and eat.

Service will be 11:00 AM Tuesday at Dodd & Reed Funeral Home, Webster Springs with Rev. Chris Cosner officiating.  Burial will follow at the Hacker Valley Cemetery.  Friends may call 6:00 PM to 9:00 PM Monday at the funeral home.

To order memorial trees or send flowers to the family in memory of Thelma Anderson, please visit our flower store.