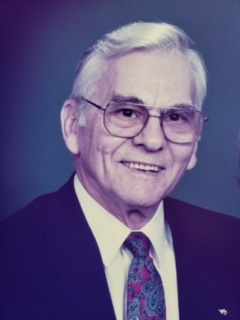 He was preceded in death by Jean, his wife of 70 years, and by his parents, Earl and Gae Cool of Diana, WV. He is survived by his sister, Neva Bickel of Woodstock, GA, his three sons; Roy Edward (Dee) Cool of Shinnston (Parkersburg), WV, John (Nancy) Cool of Lumberport, WV, Daniel ''Ike'' (Cindy) Cool of Quebec City, Quebec, Canada, 6 grandchildren and 9 great grandchildren.

Roy married Doris Imogene ''Jean'' Harper on December 26, 1948. He was a 1943 graduate of Webster Springs High School and briefly attended Davis and Elkins College after the war. He joined the navy at the age of 17 in 1943, which required special written permission of his parents. He was assigned to the USS Twiggs during WWII. The Twiggs sank after a Kamikaze attack in June of 1945. Roy was not on the ship at this time but was recuperating in the hospital from injuries sustained in a previous ship attack for which he received the Purple Heart. He found great comfort in reuniting in his retirement years with fellow survivors of the USS Twiggs at their annual reunions.

Roy found a career as a WV state police officer from 1954 to 1975 when he retired. He was stationed at several different locations in the north central part of the state. After retirement, he maintained his membership in the WV State Police Retired Members Association where, in recent years, he was the oldest member. After his retirement from the police department he worked as Director of Safety and Security for Craig Motors. He owned and operated Cool's Market in Wallace, WV and later purchased the Wholesale Auction House in Shinnston where he sold merchandise, maintained a skating rink and a small diner. Roy and his wife were members of Courtesy Squares square dance club of Lumberport for many years. They also enjoyed spending many winters of their retirement in Cocoa Beach, Florida where Roy was president of their condo association and always had an activity planned for the residents. He was a member of the American Legion Post 31, Shinnston, a Master Mason with Addison Lodge No 116, Webster Springs, a Scottish Rite 32 degree Mason, Clarksburg and a member of the Grand Chapter Royal Arch Masons Adoniram No 11. Roy was also a member of the Holly River Baptist Church.

Roy enjoyed life and had a keen sense of humor. He loved good-natured teasing with people and often gave them amusing nicknames. He enjoyed and shared his love of music, whether it was singing (he was always ready to belt out a tune), picking at the guitar or attempting to learn to play the violin when he was in his 80s. In his latter years, he never left the house without his trademark Stetson cowboy hat. He loved living and working on the family farm and was often seen at both the Webster and Braxton County Senior Centers or eating at the Hometown Diner in Diana. Roy was a published author of five books that included his memoirs and autobiography.

Cremation has already taken place. Graveside Memorial Services will be held on Saturday, May 22, 2021 at 11:30 AM at Holly River Baptist Church Cemetery with Pastor Ike Cool officiating.

Dodd & Reed Funeral Home is honored to be serving the Cool family.

To order memorial trees or send flowers to the family in memory of Roy Cool, please visit our flower store.