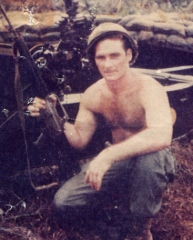 Robert Lester "RL" Garrison, 68 of Cleveland passed away on Monday, February 24, 2014 at the Louis A. Johnson VA Medical Center in Clarksburg. He was born November 24, 1945 in Charleston to George Martin and Edna Jane Via Garrison and was a lifelong resident of Webster County and a United States Army Veteran.  He retired from Sewell Coal Company where he was a coal miner for many years and enjoyed sports cars, boxing, football, playing hearts, and spending time with his family.

Friends may join the family for visitation on Thursday, February 27, 2014 from 6:00 to 9:00 PM at Dodd & Reed Funeral Home. Funeral Services to celebrate Robert's life will be held on Friday at 1:00 PM at the Funeral Home with Rev. Marty Cowger officiating. Interment will follow in Odd Fellows Cemetery, Cowen.

To order memorial trees or send flowers to the family in memory of Robert Garrison, please visit our flower store.