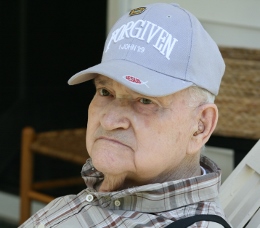 Ralph Amon Tenney, 85 of Webster Springs, went home to be with the Lord with his wife and children by his side on Sunday, August 3, 2014 at Ruby Memorial Hospital in Morgantown. He was born July 23, 1929 in Czar (Randolph County), WV to Squire Bosworth "Pete" and Lora Jane Cutright Tenney.  He served proudly in the United States Army during the Korean War. He lived the majority of his life in Webster County, was Baptist by faith, and was a former member of the VFW, DAV, Senior Citizens, and the Webster County Memorial Hospital Board. He was a retired woodsman and a former employee of Dodd & Hurt Funeral Home.

Mr. Tenney was well known throughout Webster County.  He was very active in community life and looked to for advice by many who lived in the county.  Mr. Tenney was always available to anyone in their time of need.  Mr. Tenney lived his motto of "you can't go wrong helping people".  He loved the Lord and was happy to tell anyone about his Savior.  At the center of his life was his family.  He cherished the times where the many generations would gather in his home.  Mr. Tenney lived life to the fullest, loved with all his heart, and will be missed by many.

Friends may join the family for visitation on Thursday, August 7, 2014 from 6:00 to 9:00 PM at Dodd & Reed Funeral Home. Funeral Services to celebrate Ralph's life will be held on Friday at 2:00 PM at the Funeral Home with Evangelist Charles Tenney officiating. Interment will follow in Meadowland Cemetery, Bergoo.

To order memorial trees or send flowers to the family in memory of Ralph Tenney, please visit our flower store.