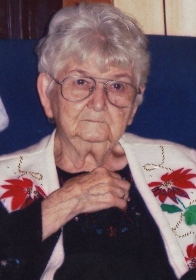 Ocie Clayton, 93 of Webster Springs, passed away on Tuesday, January 06, 2015 at her residence. She was born March 06, 1921 in Tucker County to William Marion and Clementine Byrd McCullum Blankenship and lived the majority of her life in Webster County, having moved her in the early 1940's from Randolph County. She was a homemaker who enjoyed sitting on the porch in the swing, embroidery, picnics, and especially gardening. She loved cooking and feeding her family and always had a table full of food prepared for anyone who may stop by to visit. She was Christian by faith and attended Union Mission Churches throughout Webster and surrounding Counties. She was known for breaking out in song whenever troubling times came to her family. She knew to trust God for every situation.

Friends may join the family for visitation on Monday, January 12, 2015 from 11:00 to 2:00 PM at Dodd & Reed Funeral Home. Funeral Services to celebrate Ocie's life will be held at 2:00 PM with Rev. Larry Cochran officiating. Interment will follow in Miller Cemetery, Webster Springs.

To order memorial trees or send flowers to the family in memory of Ocie Clayton, please visit our flower store.