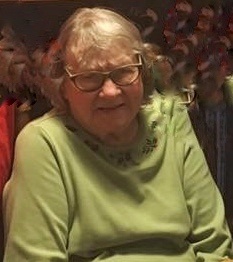 
Margaret Alverta (Coakley) Phillips was born in Webster County, West Virginia on December 11, 1930. She entered Heaven’s gates on November 23, 2017.  Margaret passed away peacefully in her sleep while at the home of her daughter, Sherry Watson, in LaGrange, KY under the care of Hosparus of Louisville. Margaret was the daughter of Samuel Clyde and Mable R. “Ruie” Coakley. She was united in marriage to Guy Phillips, Jr. on June 25, 1950 in LaFrank (Richwood), West Virginia. He preceded her in death on June 6, 1990.

Margaret was a devoted Air Force wife and mother, caring for her family as they traveled throughout the country. Though she called many towns and cities “home” over the years, her true home was in the mountains of West Virginia where she always returned.
Margaret was a member of the Bergoo Baptist Church and also had attended Gospel Fellowship Church in Upper Glade. Daily scripture reading and prayer were a cornerstone of her final months as health conditions kept her unable to attend church on a regular basis. Viewing Dr. Charles Stanley and other Christian television programs, along with reruns of Murder She Wrote and Perry Mason were the things she really enjoyed. She was accompanied during the last 13 years by her beloved dog Sandy, who passed just days before she did.

In addition to her parents and husband, she was preceded in death by a daughter, Sherry Elaine on May 3, 1957, a brother Clyde Coakley and his wife Burdena.

The family will greet friends from 11:00 a.m. – 1:00 p.m. on Tuesday, November 28, 2017 at Dodd & Reed Funeral Home, 155 McGraw Ave., Webster Springs, West Virginia. Funeral services will then follow at 1p.m. with the Rev. Bennie Cowger officiating. Burial will be immediately following at Black’s Chapel Cemetery, Camden-On-Gauley, West Virginia. Per Margaret’s request, Sandy’s ashes will be buried by her side.
While flowers will be welcome to brighten the service, please consider making a donation to Burgoo Baptist Church, Gospel Fellowship Church, or Hosparus of Louisville.

Dodd & Reed Funeral Home is honored to be serving the Phillips family.

To order memorial trees or send flowers to the family in memory of Margaret Phillips, please visit our flower store.