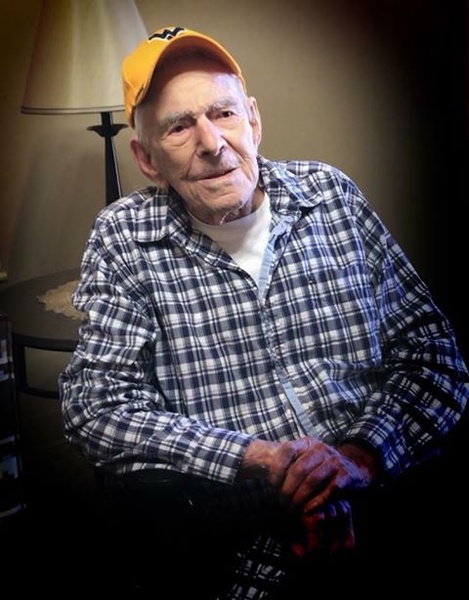 Lloyd Paul Fisher was reunited with his wife, Isabelle Hope Jordan Fisher on Thursday, April 19, at Glenville Center, Glenville, WV. His family sat at his bedside holding his hand until his journey was complete. He was known as Paul, Dad, Granddad, and Papaw by his family and Missouri Mule by his CB friends. He was the fourth born child of Benjamin Presley Fisher and Ada Pearl Cogar Fisher on March 4, 1924. He joined his siblings Jonas T. Fisher, Morgan Guy Fisher, William Waymon Fisher and, later, Cosby Elizabeth and Victor Riley at their small home in Replete. He also had half siblings, Webster, Clarence, Margaret and Cora from his fathers previous marriage. At the age of 21, Paul joined the United States Army where he fought in WWII. When he returned, he began courting the prettiest girl in Webster County, Hope Jordan. He often told stories of walking 7 miles to visit her at her home on Briar Ridge. One time when he was walking home at dark, he heard a mountain lion scream. He said he could hear it in the woods above him his whole walk. Apparently he felt she was worth getting eaten by a wild animal because Paul and Hope eventually married and had 4 boys of their own. Danny Bradford (married, Sandy Jordan), Terry Paul (married Zelma Lake), Benjamin Andrew ( married Viola Bender) and Timothy Dudley (Married Sherry Gregory). Paul settled into family life and eventually started working at Department of Highways where he was a grader operator for several years. He and Hope spent their days gardening, hunting, fishing, ginsenging, looking for arrow heads, and having weekly poker games. They had grandchildren: Sherry, Travis (Brandi) Tony (Lyndsey) Chris (Buffy), Amy (Lewis), Tina, Timmy, Preston, Dustin and Kenneth. Great grandchildren: Shala (Mark), Selena, Stormie, Travis, Stephanie, Brandon, Kylie, Jordan, Jonah, Hannah, Jasmine, Anthony, Tyson, Kridney, Brian and Whitney. Great, great grandchildren: Jace, Mason and Isabelle. Paul doted on his grandkids and in return, they loved him dearly. Paul’s wife, parents and siblings welcomed him home on Thursday while his youngest brother Victor, living in Florida, now carries the title of the oldest living member of the Replete Fishers.

At his request, Paul will be cremated and his ashes scattered with his wife on Johnson’s Ridge where they made many happy memories together. In lieu of flowers, donations can be made toward funeral expenses.

Dodd & Reed Funeral Home is honored to be serving the Fisher family.

To order memorial trees or send flowers to the family in memory of Lloyd Fisher, please visit our flower store.