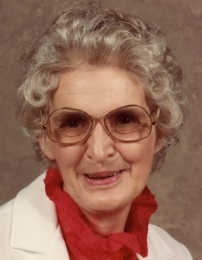 Leona Izola McCourt, 93 of Webster Springs, went home to be with the Lord on Sunday, July 7, 2013 at Webster County Memorial Hospital with her family by her side.  She was born June 24, 1920 down Elk River to Kessler Perkins and Nora McCourt Perkins Cogar and was a lifelong resident of Webster County.  She worked as a Cook for the Webster County Board of Education, Webster County Memorial Hospital, and various restaurants in town and attended Elk River Pentecostal Church and Upper Glade Holiness Church.  She enjoyed all kinds of flowers, sewing, quilting, cooking, traveling, shopping, and spending time with her family.  Her greatest joy was her grandbabies.

Friends may join the family for visitation on Thursday, July 11, 2013 from 6:00 to 9:00 PM at Dodd & Reed Funeral Home.  Funeral Services to celebrate Leona's life will be held on Friday at 11:00 AM with Rev. Jim Dyer officiating.  Interment will follow in the Green Cemetery, Elk River Road, Webster Springs.  Those wishing to make memorial contributions on Leona's behalf may do so by sending their contributions to the Upper Glade Holiness Church.

To order memorial trees or send flowers to the family in memory of Leona McCourt, please visit our flower store.