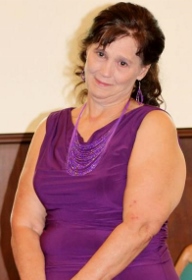 Jenny G. Neal Carpenter, 60 of Webster Springs, went home to be with her Lord on Monday, January 19, 2015 at Ruby Memorial Hospital. She was born June 10, 1954 in Winchester (Clark County), Kentucky to Leroy and Anna Mae Crawley Neal and lived the majority of her life in Webster County, spending several years in Kentucky. She was the manager for an insurance company and worked in data processing for IMC/IBM. She attended Calvary Baptist Church and when she was able to be was very active in her church.

Jenny married the love of her life, Darrell Carpenter, on May 27, 1972 and together they enjoyed nearly 43 years of marriage. She enjoyed sewing, crocheting, crafting, cooking, and baking with her grandchildren. She grew up on a farm and enjoyed playing Farmville on Facebook. She enjoyed working and spending time with her family. She was a devoted wife, mother, and grandmother; her family would not have asked for a better person to share in their life.

Friends may join the family for visitation on Saturday, January 24, 2015 from 6:00 to 8:00 PM at Dodd & Reed Funeral Home. Funeral Services to celebrate Jenny's life will be held on Sunday at 1:00 PM at the Funeral Home with Rev. John Radcliff officiating. Interment will follow in the Woods Cemetery, Webster Springs.

To order memorial trees or send flowers to the family in memory of Jenny Carpenter, please visit our flower store.