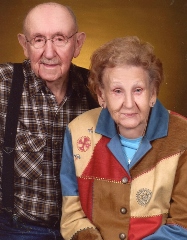 James Henry Hall, 91 of Curtin went home to be with the Lord and together again with his wife Dot, surrounded by his family members on Monday, May 26, 2014 after a short illness.

Henry was born January 25, 1923 in Bland County, Virginia to Dave and Lula Hall. He was a World War II United States Navy veteran and was a Past Master of Addison Lodge 116 AF&AM where he was a member for 45 years. He previously served as a member and president of the Webster Springs Volunteer Fire Department and was a member of the Webster County Coon Club. He worked as a sawyer and retired from Pardee & Curtin Lumber Company. He attended Barton United Methodist Church, was an avid hunter, fisherman, and also enjoyed riding his ATV. He loved people and loved to talk with everyone; he never met a stranger. Most of all, he loved his family and his Lord.

Friends may join the family for visitation on Wednesday, May 28, 2014 from 6:00 to 9:00 PM at Dodd & Reed Funeral Home. Funeral Services to celebrate Henry's life will be held on Thursday at 11:00 AM with Rev. Gerald Hamrick officiating. Interment will follow in Miller Cemetery, Webster Springs. In lieu of flowers, Memorial Contributions may be made to Addison Lodge 116 AF&AM.

To order memorial trees or send flowers to the family in memory of James Hall, please visit our flower store.