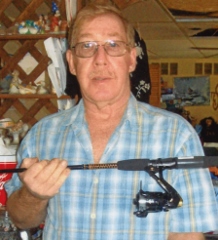 Hubert V. Anderson, 57 of Webster Springs, went home to be with his Lord on Sunday, April 27, 2014 at his home with his family by his side. He was born February 24, 1957 in Buckhannon to Hugh V. and Lucy DeGarmo Anderson and was a lifelong resident of Webster County. He retired from the West Virginia Department of Transportation after many years of service as a Crew Leader. He enjoyed hunting, fishing, gardening, vacationing, working on cars, and piddling around. Hubert attended Orndoff Community Church and was a Christian who loved going to church, serving God, and helping others. There was never a time that someone called on him to help that he did not lend a hand. He never met a stranger and always had a smile.

Friends may join the family for visitation on Wednesday, April 30, 2014 from 6:00 to 9:00 PM at Dodd & Reed Funeral Home. Funeral Services to celebrate Hubert's life will be held on Thursday, May 1, 2014 at 2:00 PM at the Funeral Home with Rev. David Chapman and Rev. Harold Schrader officiating. Interment will follow in Harrison Cochran Cemetery.

To order memorial trees or send flowers to the family in memory of Hubert Anderson, please visit our flower store.