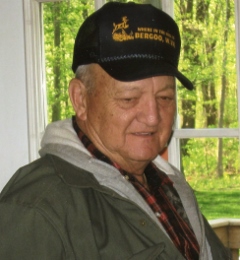 Howard Ivan Walters, Sr., 79 of North Bloomfield, OH, formerly of Webster County, passed away on Wednesday, July 2, 2014 at Trumbull Memorial Hospital in Warren. He was born May 17, 1935 in Elkins to Lew and Madge Blankenship Walters and was a steel mill worker. He was a member of the United States Air Force and the National Guard.

Friends may join the family for visitation on Tuesday, July 8, 2014 from 1:00 to 2:00 PM at Dodd & Reed Funeral Home. Funeral Services to celebrate Howard's life will be held at 2:00 PM at the Funeral Home with Rev. Cofer "Bud" Cochran officiating. Interment will follow in Meadowland Cemetery, Bergoo.

To order memorial trees or send flowers to the family in memory of Howard Walters, Sr, please visit our flower store.