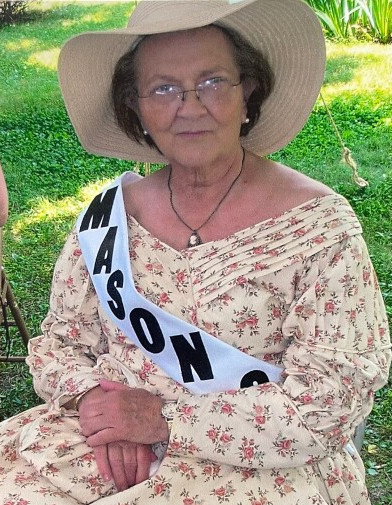 Ellen Ann Miller was born on August 24, 1940 in Widen, a daughter of the late Walter and Gladys Crites Mullens. She went “home” to her Master when her much awaited tulips bloomed on April 14, 2022. Ellen attended Webster Springs High School, where she was a cheerleader and majorette. She graduated with the Class of 1959.

In 1961, Ellen married Arnie Miller and they moved to Indianhead, MD, where Arnie was employed by the US Government. They were blessed with daughter Tammy and son Sean. While in MD, Ellen worked as a secretary for the President of Charles County Community College. In 1974, Arnie and Ellen returned to Pt. Pleasant. In the years following, Ellen was a paralegal to Senator Mike Shaw. She opened her own Miller’s Florist in Pt. Pleasant in 1985 and remained there until she retired in 1992. Ellen was also an avid supporter of Special Olympics throughout her lifetime.

Ellen was a member of the Mason County CEO and in 2013 was chosen as Mason Count Belle to attend the WV State Folk Festival in Glenville. She was also very active in the Federal Employees Retirement Organization. After Arnie’s death in 2007, Ellen spent many days in Webster Springs pursuing her hobbies of gardening, making maple syrup, and fishing in the beloved Elk River. She also enjoyed attending and participating in the Burgoo Cookoff competition in Webster Springs, winning a medal in 2019.

Memorial Services to celebrate Ellen’s life will be held on Sunday, May 29, 2022 at 2:00 PM at Dodd & Reed Funeral Home, Webster Springs. Friends and family will be received one hour prior to service time. Interment will be in Miller Family Cemetery, Grassy Creek.

In lieu of flowers, donations may be made in Ellen’s memory to David Gillespie, 386 Bell Street, Webster Springs, WV 26288 for maintaining Lover’s Lane Boardwalk in Webster Springs.

To order memorial trees or send flowers to the family in memory of Ellen Miller, please visit our flower store.