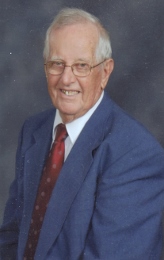 D.M. "Doc" Mace, 93 of Alcoa, TN, went to be with our Lord on Sunday, August 3, 2014 at Webster County Memorial Hospital after a brief illness. He was born November 14, 1920 in Pickens to Upton and Annie Kinneson Mace and was a Pickens High School Graduate Class of 1938. He was a United States Army veteran serving in WWII and was a member of Alcoa United Methodist Church. He was a retired furniture repairman, upholsterer, and carpet layer and had previously worked as a janitor. He enjoyed hunting, fishing, watching wildlife, traveling, socializing, making people laugh, and helping others. He was always ready to lend a helping hand. He was a member of the Teamsters Union and Farm Bureau of TN and most recently was a volunteer at Blount Memorial Hospital in Maryville, TN.

Private Memorial Services were held at the Masonic Cemetery in Weston with Rev. Brandon Moll officiating. At the request of the family, Memorial Contributions may be made to the Pickens Historical Society, Main Street, Pickens, WV 26230.

To order memorial trees or send flowers to the family in memory of D. Mace, please visit our flower store.