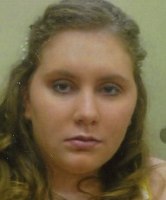 Brooke Leigh Springer, 23, of Webster Springs passed away on Tuesday, August 13, 2013 at Charleston Area Medical Center Memorial Division in Charleston.  She was born October 4, 1989 in Ravenna, OH to Carmen Utt Springer and the late Timothy Springer.  She lived most of her life in Webster County, was Protestant by faith, and a 2008 Webster County High School Graduate.  During her high school years, Brooke enjoyed participating in sports until her car accident her senior year.

Brooke is survived by her special dog and baby BELLA; mother Carmen Utt Springer; brothers T.J. (Loretta) Springer of Bolair and Oda (Catelyn) Springer of Flatwoods; nephews Domonic, Braylon, Lane, and Levi; and nieces Hope and Elizabeth.  She was preceded in death by her father; sister Virginia Springer; and grandparents Charles and Mable Utt and Oda and Virginia Springer.

Friends may join the family for visitation on Saturday, August 17, 2013 from 6:00 to 9:00 PM at Dodd & Reed Funeral Home.  Funeral Services to celebrate Brooke's life will be held on Sunday at 1:00 PM at the Funeral Home with Rev. Venus Farlow officiating.  Interment will follow in Chestnut Grove Cemetery, Hacker Valley.  Memorial Contributions may be made to Dodd & Reed Funeral Home to assist with funeral arrangements.

To order memorial trees or send flowers to the family in memory of Brooke Springer, please visit our flower store.