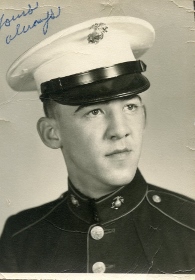 Bernard Bailey Cogar, 81 of Webster Springs passed away on Sunday, April 5, 2015 at the home of his daughter Cynthia. He was born November 3, 1933 in Webster Springs to Patrick Bernard and Nora McCourt Cogar and lived the majority of his life in Webster County. He served in the Marine Corps during the Korean War. After returning home he moved to Cleveland, Ohio to work for Republic Steel and then moved back to Webster Springs where he worked for Webster Saw & Gardens and then Carpenter's 5&10. He loved to play cards, watch WWE, and talk about growing up down Elk River.

Friends may join the family for visitation on Wednesday, April 8, 2015 from 6:00 to 9:00 PM at Dodd & Reed Funeral Home. Funeral Services to celebrate Bernard's life will be held on Thursday at 11:00 AM at the Funeral Home with Evangelist Charles Tenney officiating. Interment will follow in Miller Cemetery, Webster Springs. In lieu of flowers memorial contributions may be made to Disabled American Veterans 1722 1 Street NW210 Washington, DC 20421, Webster Springs Baptist Church 112 South Main Street Webster Springs, WV 26288, or Hospice Promise Foundation 102 Pallottine Drive Buckhannon, WV 26201.

To order memorial trees or send flowers to the family in memory of Bernard Cogar, please visit our flower store.