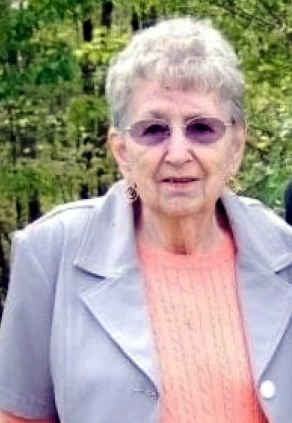 Award winning Webster County Poetess Arthela ‘Pearl’ Buck from Bergoo entered her eternal rest with Jesus on July 31, 2021 after an extended illness. She was born in Bergoo on April 21, 1926 to Peter Benjamin Cowger and Lilly E (Doddrill) Cowger.

She attended Bergoo Grade School where she would go on to win the coveted Golden Horseshoe. Graduating from Webster Springs High School in 1945 she got a job at Pardee Lumber Company as a secretary where she would work until she moved to Detroit, Michigan to attend secretarial school. While there she would meet and marry her husband of 70 years Charles Leroy ‘Chuck’ Buck, Jr. and start a family.

While in Michigan she started her writing career when she wrote a poem for the Suburbanews. This was the newsletter for Suburban Motor Freight Company that Chuck, her husband, worked for; and the poem was about their first Family Field Day. While living in the Detroit area she also became an avid archer and won several competitions. In 1957 she returned to West Virginia and began a life with her family in a home approximately 1,000 yards from the very home in which she was raised. While raising her family she took up employment as a seamstress for the Webster County Hospital along with doing various tailoring jobs for individuals in the community. She would later go to work for the West Virginia Department of Human Resources and remain there until her retirement.

Many people from Webster County are familiar with her poetry as they have been published in the Webster Echo/Republican. She received the Golden Poet of 1989 award for her entry titled “Holy Birth” in a contest sponsored by World of Poetry of Sacramento, California. The following year, World of Poetry would honor her with the Silver Poet Award for her poem titled “Peace”. After writing poems for over 50 years, in 1994 she self-published a collection of her works titled “Pearl’s Gems”. In 2018, 24 years later, she would self-publish a second collection titled “Pearl’s Gems, Volume Two”.

She was an active member of the Bergoo Baptist Church and enjoyed being a part of a gospel quartet that included Leota Tenny, Vickie Hamrick and Mary Rose. They traveled around the local area singing in church services and revivals. They also made several trips to churches out of state where they spread the Gospel through song. She loved her Savior, her church, her nation and her family.

When her youngest son retired from the US Navy, the Department of the Navy awarded her a Certificate of Recognition and a flag for nearly 75 years of Service to the Nation. The 75 years was an accumulation of all the years her five sons had served on active duty.

She enjoyed playing cards and generally whipped everyone she played against. Her other passions included reading, needlepoint, working crosswords and word searches, quilting (some of which won Blue Ribbons at the Webster County Fair), visiting with friends on Facebook, Family Feud and watching the Hallmark channel.

Memorial Services to celebrate Pearl’s life will be held on Sunday, September 26, 2021 at 1:00 PM at Bergoo Baptist Church with her brothers, Pastors Bennie Cowger and James “Marty” Cowger officiating.

Due to the COVID-19 Virus, the family requests facial coverings be worn by those attending both visitation and services.

Dodd & Reed Funeral Home is honored to be serving the Buck family.

To order memorial trees or send flowers to the family in memory of Arthela Buck, please visit our flower store.